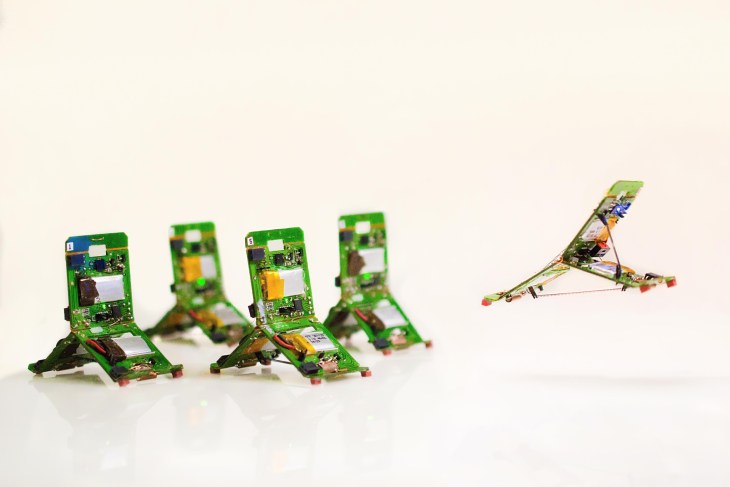 While the agility of a Spot or Atlas robot is something to behold, there’s a special merit reserved for tiny, simple robots that work not as a versatile individual but as an adaptable group. These “tribots” are built on the model of ants, and like them can work together to overcome obstacles with teamwork.

Developed by EPFL and Osaka University, tribots are tiny, light and simple, moving more like inchworms than ants, but able to fling themselves up and forward if necessary. The bots themselves and the system they make up are modeled on trap-jaw ants, which alternate between crawling and jumping, and work (as do most other ants) in fluid roles like explorer, worker and leader. Each robot is not itself very intelligent, but they are controlled as a collective that deploys their abilities intelligently.

In this case a team of tribots might be expected to get from one end of a piece of complex terrain to another. An explorer could move ahead, sensing obstacles and relaying their locations and dimensions to the rest of the team. The leader can then assign worker units to head over to try to push the obstacles out of the way. If that doesn’t work, an explorer can try hopping over it — and if successful, it can relay its telemetry to the others so they can do the same thing.

It’s all done quite slowly at this point — you’ll notice that in the video, much of the action is happening at 16x speed. But rapidity isn’t the idea here; similar to Squishy Robotics’ creations, it’s more about adaptability and simplicity of deployment.

The little bots weigh only 10 grams each, and are easily mass-produced, as they’re basically PCBs with some mechanical bits and grip points attached — “a quasi-two-dimensional metamaterial sandwich,” according to the paper. If they only cost (say) a buck each, you could drop dozens or hundreds on a target area and over an hour or two they could characterize it, take measurements and look for radiation or heat hot spots, and so on.

If they moved a little faster, the same logic and a modified design could let a set of robots emerge in a kitchen or dining room to find and collect crumbs or scoot plates into place. (Ray Bradbury called them “electric mice” or something in “There will come soft rains,” one of my favorite stories of his. I’m always on the lookout for them.)

Swarm-based bots have the advantage of not failing catastrophically when something goes wrong — when a robot fails, the collective persists, and it can be replaced as easily as a part.

“Since they can be manufactured and deployed in large numbers, having some ‘casualties’ would not affect the success of the mission,” noted EPFL’s  Jamie Paik, who co-designed the robots. “With their unique collective intelligence, our tiny robots can demonstrate better adaptability to unknown environments; therefore, for certain missions, they would outperform larger, more powerful robots.”

It raises the question, in fact, of whether the sub-robots themselves constitute a sort of uber-robot? (This is more of a philosophical question, raised first in the case of the Constructicons and Devastator. Transformers was ahead of its time in many ways.)

The robots are still in prototype form, but even as they are, constitute a major advance over other “collective” type robot systems. The team documents their advances in a paper published in the journal Nature.

If you’re having WiFi problems try turning your WiFi off and then back on. It’s also a good idea to power down your WiFi router at home for a minute, or even unplug it for 5 minutes before turning it back on. Another option is to head to Settings > WiFi and forget your wireless network. Then search again and reconnect, put in the password, and try it again. This completely resets the connection between your phone and WiFi and gives it a fresh start.

As far as WiFi calling problems OnePlus is aware of them and working on a solution.

Bluetooth should be more stable than ever before on Android 9 Pie and your OnePlus 7 Pro. That said, we are seeing a few complaints about it from people trying to use it in a car, truck, or with Android Auto.

The biggest complaint is Bluetooth in cars, where the phone simply won’t connect. Some owners see it, but the phone is greyed out on the car infotainment system. We’re also hearing talk of a small delay in the audio. If so, turn off HD calling in settings, as a few users claim that fixed the problem. Another idea is to simply reboot your device, or restart your car and stereo. Bluetooth is always a little tricky, so try to forget all pairings and start over and see if it goes away.

Basically, unpair everything and start over. Whether that’s your car, a speaker, or some headphones. We also recommend checking for updates to your car stereo, especially if you use something like a Pioneer.

This year OnePlus really stepped up its game for the cameras, front and back, but we’re still seeing some complaints. Mainly about the overall quality or speed of the auto-focus, two areas which can and will improve over time.

So far we’re seeing most people simply complain that the auto-focus is slow, especially in dark or poor lighting. This makes sense, as the camera can’t see anything to focus on. With the main camera, wide-angle, and a telephoto zoom, you have plenty of options to take great photos.

Then, a few reports suggest the pop-up selfie camera keeps popping up on its own, for no reason, which is troubling. While the company already acknowledged that issue, they’re still working on a fix. However, we’ve heard turning NFC off will fix it. Plus, an update on May 28tharrived with camera improvements, and an even bigger camera-fixing update arrived in June. We’re seeing similar photography enhancements for the smaller 7. Plus, the July 8th update mentions better camera quality, speed, performance, and speed switching between the lenses.

The OnePlus 7 Pro is available form T-Mobile, and it works on other carriers like Verizon and AT&T. The T-Mobile model is fine, but those taking it to Verizon are having issues with 4G LTE, calls, text messages, or sending MMS picture messages. For one, make sure you’re using the right APN settings.

Additionally, here’s what we’re hearing will fix Verizon OnePlus 7 Pro text problems. You can call Verizon and they’ll slowly walk you through a few steps. Or, login to your account, then head to My Verizon > My Device > Activate or Switch Device > Activate on an Existing Line, and then follow the instructions that pop-up. This gives the phone what it needs to communicate with Verizon and CDMA-Roam.

If you’re facing WiFi calling drops, VoLTE issues, or other carrier related things OnePlus is working on a few fixes for those early problems.

This most recent update addressed a few of those issues, like the camera popping up during an incoming call, and more fixes are on the way.

While the OnePlus 7 Pro doesn’t have complaints about the screen like older phones, we are seeing a few odd bugs. For one, people are talking about the display colors. You can easily change those in settings, and OnePlus provides more control than most manufacturers, so give that a try first.

However, we’re seeing complaints that the screen isn’t perfectly aligned with the device, talk of OnePlus 7 Pro eye strain, brightness glitches and phantom touches where the screen thinks you’re tapping the screen when you’re not. This phone has a high 90Hz refresh rate and your eyes may need a day or two to get used to it. Or, go to Settings > Display > and turn it back down to 60Hz like most phones. This’ll improve battery life too.

As for the phantom taps and things opening when you didn’t tap on them, this is a big issue. Apparently, users can turn off NFC in settings to fix it, but that’s only a temporary solution. And now, we’re hearing that some users have corners that don’t recognize taps or touches. OnePlus is very aware of this situation and just released a June 18th update to fix screen sensitivity, taps, and other issues. Get it here.

We’re also seeing several complaints about the helpful tap-to-wake and ambient display features having a few issues. Get the latest update to fix ambient display and sensitivity problems. Are you experiencing any of these? Let us know below.

Of course, these are just a few of the many potential issues someone could face. We did see a few other small complaints, but they weren’t widespread enough to mention. If you’re running an Oxygen OS beta, or the Android Q beta, expect to deal with problems. Here’s how to revert back to the stable channel. Don’t forget to scroll through this list of common Android Pie problems and fixes.

For any and all other problems, the first step is to quickly reboot your OnePlus 7 Pro. Whether that’s screen glitches or rotation, app crashes, battery drain, overheating, lag, or other minor things, try rebooting your phone. Actually, you can fix almost all little problems by giving it a quick reboot. Simply long-press the power button, and hit “restart”.

Honestly, rebooting the phone at least once a week is probably the best thing you can do for performance, battery life, and general use. If the phone is completely unresponsive push and hold the power button and volume down for 10-15 seconds to force a reboot. This also solves most little issues.

How to Factory Reset the OnePlus 7 Pro

In closing, if you are experiencing major problems or can’t find a solution to something, try a factory data reset. Honestly, we don’t recommend this unless it’s a last resort because it erases everything from your phone. However, it’s been shown to fix a variety of problems both big and small. Backup anything important, then follow our steps below.

Head to Settings by pulling down the notification bar and hitting the gear-shaped icon near the top. In settings scroll down to Backup & reset and then tap Factory Data Reset. The phone will reboot a few times, erase everything, and boot up fresh and ready to go. This will give you a completely fresh start, and often solves pesky problems.

What’s Next for the OnePlus 7 Pro?

So what’s next for you and your phone? Well, considering it is still new you can expect at least 2-3 updates within the next month or two this summer. Our first big update came on June 18th, and another big one just got released on July 8th. OnePlus is great at releasing a device, listening to customer feedback, and rapidly deploying improvements and bug fixing upgrades. They’ll do that here.

As for what’s actually next for the OnePlus 7 Pro, aside from bug fixing updates, is the official update to Android 10 Q later this year. We’re expecting 2-3 more beta versions with improved performance and new features, then the official global release of Android Q in August. Once it arrives, OnePlus will quickly deliver it for the 7 Pro within a month or two.

In the meantime, stay tuned to the official OnePlus forums for more information, incoming updates, and other helpful advice. As soon as new software arrives to fix any of these problems we’ll update this post. Before you go, keep your phone safe with one of these best OnePlus 7 Pro cases.