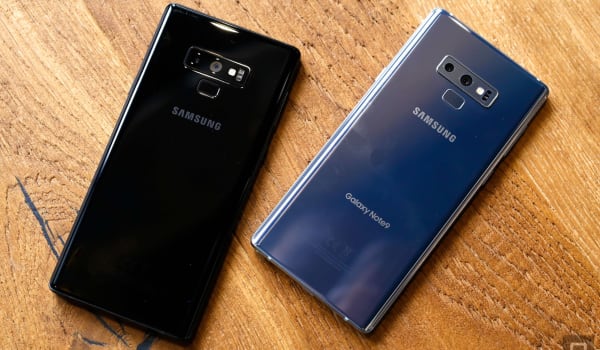 Samsung Galaxy Note 9, an android device that spell the mind was released for with two branded new colours

When Samsung’s excellent Galaxy Note 9 launched in the US earlier this year, it came in some… shall we say, unconventional colors. It’s not often that a massive, sales-focused company moves past safe options in favor of lilac and ocean blue, but whatever — we appreciate gutsy moves around here and the phones looked great.

That said, Samsung wants to get the Note 9 into as many purses and pockets as possible, and that means releasing a few new color options. Starting on October 5, phablet fans will be able to pick up a Cloud Silver Note 9 from Best Buy and Samsung.com, and a week after that, the 128GB Midnight Black Note 9 will go on sale through Samsung, carriers and the usual retailers. You’re in for a bit of a wait if you wanted the tricked-out, 512GB Note 9 in that deep black, though: for whatever reason, that one’s not going on sale until October 26. Pushing out new color options to get people worked up over a recent release is nothing new for Samsung — we ogled the handsome, gold S9 and S9 Plus over the summer. And before that, the tech titan pushed out a red S9 colorway in China before bringing it to the rest of the world. Still, it’s refreshing to see Samsung take a chance on more exciting, interesting designs before making traditional, staid options available here — it speaks to a sort of confidence Samsung has about the value of its designs. It’s kind of ironic, then, that people’s confidence in Samsung is starting to erode somewhat — after all, the chairman of Samsung’s board was just indicted over his union-busting tactics.

Recently, Galaxy Buds users were facing a weird issue while pairing it with any device. The problem caused many users to keep it side or opting for any alternative temporarily. But after knowing this issue, Samsung Galaxy Buds team didn’t take any significant step to solve this. So follow this tutorial to fix the pairing…Read […]

Evan Blass The OnePlus 8 series is almost here. We’re just a few hours away from the launch of the new flagships and this year, the top-of-the-line OnePlus phone, the OnePlus 8 Pro, is expected to reach the $1,000 price mark as the company moves towards more premium offerings. We’re expecting OnePlus to launch the […]